I have been listening to Pandora's Music for about a year now. I really like to concept and the variety that I get to listen to. If you have never tried it, it's so easy. You set up an account, tell the site what artist you like and they provide music that is similar. The artists are not well known but the music is great. I haven't been disappointed yet.

I have several radio stations set up according to my many moods. Like today, I'm working from home because I have to head into the office tonight at 9 and work until 1 or 2 am. Software launch, crazy schedule!! Anyway, I'm working in my home "office" which is my "sun" room. I have scented candles, liquid potpourri, cuddled up working in my papasan chair (I love this thing!!) and have my computer speakers hooked up - listening to "Sara McLaughlin" radio on Pandora's. It's blissful and I'm totally blessed!!

The way Pandora's works is like this - they present a song by the artist requested, then they pull songs that are similar. You help guide the channel by giving the "thumbs up" or "thumbs down" to each of the songs that you like or not. If you give the thumbs up or do nothing, the song plays in it's entirety. If you give the thumbs down, the song stops and it moves to the next one queued up. Pretty ingenious way to present the tunes and expose you to LOTS of new artists and music.

When I go into the office tonight, I am going to take in some baked Ziti - YUM! pick up some baguettes or french bread on my way in, take in a Starbucks Venti Coffee Light Frappachino, mmmm, doesn't that just sound so good??? And one of my co-workers is bringing in a homemade cheesecake - how spoiled is that!?! Our team is going to love us!! 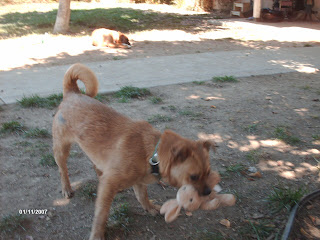 Also, the rescue presented me with another dog choice. They PROMISE this little guy is socialized and is very loving, affectionate and playful. He had some issues, they have taken care of most of the problems so far. He's been neutered, has demodectic mange. I believe his is localized, and after reading the description of this type of mange, also referred to as "red mange", is non-contagious, but could be due to an immune system defect. I don't know if that means he could easily get some other illness, but I will definitely ask.

He also had cherry eye and that's been surgically corrected. And one more thing mentioned was an umbilical hernia repair, which I think could be a ruptured belly button, well dogs don't have belly buttons, but a protruding umbilical "something". I don't know. But all worthy topics with the vet to understand why this little guy had all of these things wrong with him already. He's only about 10 months or so.

ISN'T HE SO CUTE? I'M A SUCKER FOR A CUTE LITTLE DOG!! I COULD RESCUE ALL OF THEM IF I HAD THE ROOM :)