Wow! What a BIG surprise, Sarah Palin for VP! I, for one, am very pleased with the announcement.

To be honest, I didn't care for either candidate - I don't care for Obama and especially NOT Joe Biden. If this is touted as "change" then - wow - I don't want it. If Obama would have ask Hillary to run with him - now that was the winning ticket - no one could have stopped him. Whether I liked Obama or not, he would have been my new president on Nov 4th. But picking Joe Biden - yea, like that's really "change". To me, it's politics as usual.

I'm not an ultra-right-wing conservative, but I am conservative about some issues, more moderate on others. Fortunately for me, many of my views are shared by McCain. By adding Palin to the ticket, it equalizes many of those issues, enhances many of the others. It's perfect! It also breaks down the "good old boys" network!

As for the feminists around, I haven't heard of many reports where they are actually happy or supportive. I don't understand why. I am a feminist, I fought for equal rights since the 60's/70's. I believe in equality. Equal pay for equal work. Sarah Palin is one of many women in political office with a good track record, strong ethics. Gotta love her!!

So, now the left-wing media is accusing McCain of choosing Palin just because Obama made the terrible mistake of choosing Biden instead of Clinton. I think their thinking is hilarious. I think they just can't stand that McCain one-upped Obama.

Thanks for reading my Heavenly Thoughts
Posted by Unknown at 3:01 PM No comments: Links to this post

Last weekend we went to see Bob Dylan at Riverbend. I was so excited, I just couldn't wait to see him. You see, a couple of years back when he started on this tour, he was coming to San Diego's Cox Arena. I had KILLER seats, just the best ever and I was soooo happy. But then my son called me to tell me that he and Michelle were moving the wedding up and it would be 3 weeks from then! 3 weeks! Ok, Yeah, Excitement until I realized it was the same weekend.

Sold the tickets on Craigslist to a guy in Anaheim. He told me later how great the concert was and thanked me for the KILLER seats!! So, some time back when I saw that Bob Dylan was coming, we decided to go to make up what we missed out on 2 years ago.

Honestly, I should have kept the money in my pocket. I won't go again. And here's why.....
every song had basically the same arrangement. New or Old, didn't matter, they all sounded alike.
Then they were all dressed alike, in some black suit Amish style with hats and everything. They kept the stage lights down low - probably because it was soooooo hot and humid out. After every song, they turned out the lights and when the applause died down, they started another song and turned the lights back on. Bob Dylan played keyboard all night with a little harmonica. He was faced in the same direction all night away from us. That sort of ticked me off.

But the clincher was - he didn't sound that great, I don't know if it was him or the sound system, but you couldn't understand what he was singing until every once in a while you'd hear a familiar word or two. And he NEVER spoke to the crowd until the encore in which he said 'thank you friends' pointed and mumbled something about his band and that was it.

It was very disappointing for us. We were ready to go and at one point I almost fell asleep!! Never again.....I guess somethings are better left in the past - and for me - that's where Bob Dylan will stay.

Thanks for reading my Heavenly Thoughts
Posted by Unknown at 9:04 PM No comments: Links to this post

Another day in project paradise

I haven't complained too much about Sharepoint MOSS 2007 up to this point. My current project is being developed in SP, it's a publishing site. I actually read and believed the MS propaganda about all the cool things SP can do right out of the box. Yes, me, the MS skeptic, actually drank the koolaid. But today, when I watched my team of some of the most intelligent people I've ever worked with struggle with the content web editor, all the steps to publish a page, all the hoops to jump through, I really felt this disdain bubble up for Sharepoint.

It's like they must have sat in a room and decided to make this the absolute WORST publishing tool EVER!! I have been far better off with notepad that SP. And my poor teammates! It's their site, they have to maintain it from now out and it's not intuitive, easy, or even make sense in most cases. The success of this project means so much to our team and I fear that once we've negotiated and compromised over the limitations SP presents that now that the content mgmt portion is so horrid, the up-keep will be dreaded.

I hope they find better ways to accomplish what they want. I hope that as time goes by they can hire an intern or someone to come in an just enter content. But in the meantime, I wish them the best and hope they are happy with the end results.

Thanks for reading my Heavenly Thoughts
Posted by Unknown at 8:58 PM No comments: Links to this post 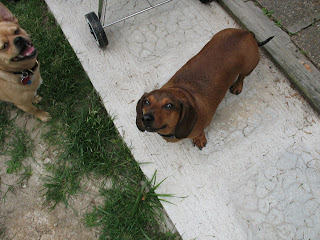 Our poor doggy - Charlie - is sick. He's at the vet's since yesterday evening. They are running tests to see what's wrong with him. X-rays, blood tests, barium study, IV because he was dehydrated, and a few more things. They thought at first it might be Parvo - and even though he's been vaccinated he could still contract it. They checked his blood to see if he ate a small animal that might have been poisoned, thus poisoning himself and luckily it was neither of those. But they still don't know what it is.

They are looking either for something in his stomach that he ate and can't pass OR for something outside of his stomach (like a tumor) that is pushing on his stomach. And unfortunately, it's sooooo expensive that it's hard to know how much cost is too much. I'll keep you posted.

Thanks for reading my Heavenly Thoughts
Posted by Unknown at 1:08 PM No comments: Links to this post

What a treat!! Bryan Adams and Rod Stewart on a Friday night, last minute and FREE!! Gotta love it! I received tickets from work and got to go to Riverbend to enjoy PERFECT weather and PERFECT music! The show was totally enjoyable, much like the Tom Petty concert. There were tons of women at the concert, you could tell it ranked as a good "Girls Night Out". And why not, Rod Stewart might be 63 years old, but let me tell you - he's HOT (thanks Paris!) and is still sooooo SEXY! My my my.

He is also a perfect gentleman. He thanked the audience for spending their hard earned money to come to see him perform. He promised to give them their money's worth - which he did! He graciously shared pictures of his family with us with a slideshow during a song. He sang many of the standard Rod Stewart songs, but there's so many I don't think he could manage all of them in one show. He had many very talented, hot female musicians, so for the guys that were in attendance there was plenty of eye candy on stage for them. Not to mention the women in the audience.

I highly recommend this tour - and as always, Riverbend is a perfect venue (to me). Cool, starry night, right by the river. This property holds a lifetime of memories for many Cincinnati natives. Those of us that remember Coney Island, swimming at Sunlight pool and then the emergence of Riverbend music center. It's just a great place to go.

Thanks for reading my Heavenly Thoughts
Posted by Unknown at 11:51 AM No comments: Links to this post