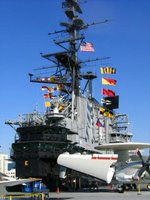 we went to San Diego over the weekend. He wanted to take me around and show me the sites. We had a blast!! I got to meet an old friend of his. Then he took me to the Midway AirCraft Carrier and took the tour. We walked around down by the pier. He showed me the fish market, Coronado, North Island (where he will be working). We went to a Thai restaurant in Imperial Beach, a sushi restaurant in El Cajon (I think), stayed in a nice hotel.


Then we went to Julian in the morning and stopped at Dudley's Bakery in San Ysabel. 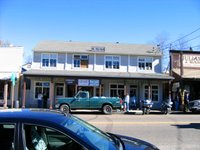 Dudley's is a very famous bakery and people come from miles around to buy from them. It was delicious. Julian was very quaint, built around the gold rush time. The architecture of the buildings reminded me of the mid-west architecture. I could tell that the original founders were from the east and brought the style of houses and buildings to the west. It was very comforting in a way, kind of funny. It was very nice to walk around, look in the shops, in fact, he is totally fun to shop with. You don't find too many men that like to shop or you can have fun with shopping. He is both!!


He drove me the scenic route everywhere and I got to see some beautiful parts of southern California. He had stories of other 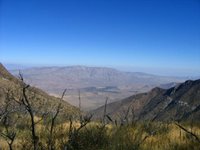 times he had been there and they were fun to listen to. It's fun to go out and about with him. He loves to show me around. He loves to share with me. It's great!!

I drove us home from northern San Diego county. I drove all through the LA traffic on a Sat night. Can you believe it was bumper to bumper all through the city??? At least 1 1/2 hrs to drive through. I'm sure it's worse during rush hour. BOOKS ON TAPE will save the day!!
Posted by Unknown at 3:12 PM